Skip to content
Posted on 8 Apr 2019 by Paul Challinor

As we sat down to have our coffee the other morning while walking the coastal path on Gower i was visited by one of my favourite beetles. In fact it is one of only 4 beetles I can easily identify without long periods of time staring at field guides. Mind you I’m not including Ladybirds in this short list. I have a fighting chance with them. The curiously named Bloody-nosed Beetle (Trimarcha tenebricosa) gets it’s name from a defensive reaction when threatened. It releases red coloured hemoplymph from it’s nose area (if a beetle has a nose that is). This apparently tastes foul, though I’m certainly not going to test it myself, intended to prevent anything from eating it. At between 18-23mm longs, it’s among the largest of beetles tat are found in the UK.

The coastal path is an ideal environment of it to thrive as it favours grassland, heathland and hedgerows where Ladies Bedstraw and Cleavers(Goosegrass) are readily found for the larvae to feed upon. The life-cycle is such that both eggs and adults overwinter, and so in spring, developing larvae are present at the same time as actively mating adults. But generally the adults can be found from April through to September, and we often come across it around the coast when we are out and about. 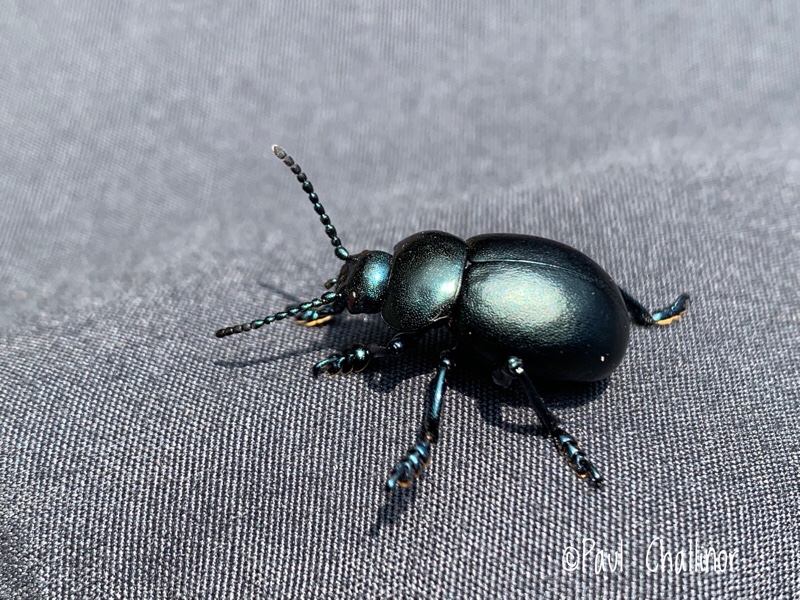 They have a striking appearance, especially when the sun emphasises an iridescent blue-black sheen on the carapace. But look closer and you can see that’s the antennae look like a string on black pearls. The tarsi also have a globular appearance as well, and this seems to create a strange fascination as I watch them lumbering slowing over the grass. As each leg is swung outwards and then froward they look walk like a cartoon wind up beetle, with the legs on each side moving alternatively resting a swaying movement. It;s not smooth, it’s not fast, but it is intriguing 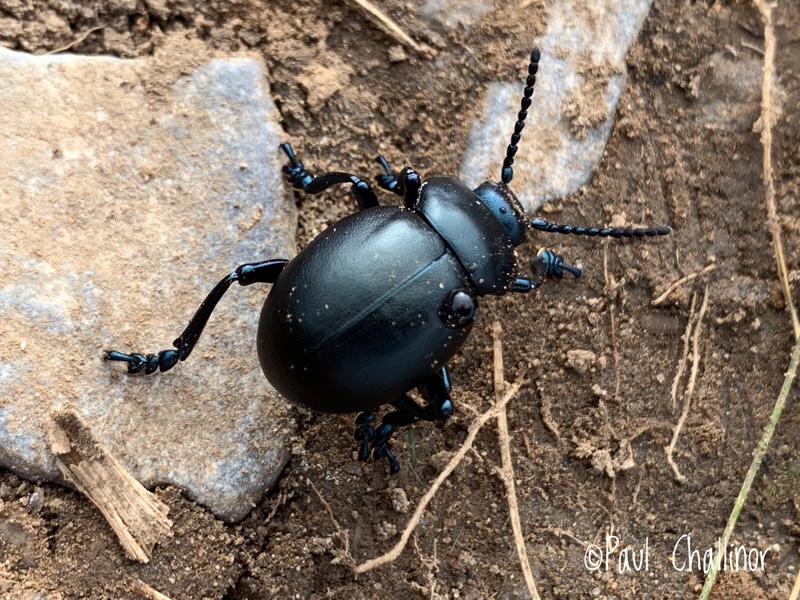 When viewed from above, it’s easy to see a line down the centre of its back that gives the appearance of wing casings, however the elytra as but i are fused together. Bloody-nosed beetles are flightless. This does present a challenge to it’s spread if there are threats to it’s immediate environment. Without flight, and with a slow lumbering walk dispersal is a slow business, and will be dependent on a continuous and accessible habitats allowing it to continue breeding and expand.

View all posts by Paul Challinor